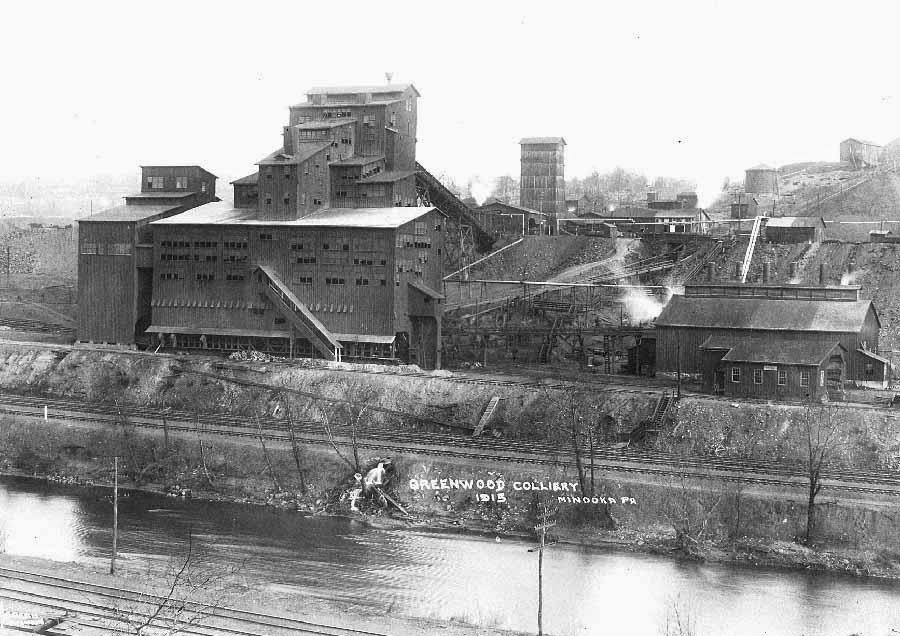 Three Men Entombed in the National Mine
Body of Michael Kelly Was Found by Rescue Party
at 11:15 o’clock Last Night - Large Area Affected
Thirty-five Men in that Part of Mine When Caving
Began Yesterday Morning - Many Had Narrow Escapes
Rescue Crews Working with Feverish Haste to
Reach Those Still Entombed

Three men were entombed, one man killed, three were injured, several others had miraculous escapes from death, and twenty acres of land were dropped in South Scranton in a squeeze of gigantic proportions in the Devil’s Eyebrow of Dunmore No. 2 vein of the National mine of the Glen Alden Coal Company yesterday morning.

Seventy-five men attacking the mass of debris, coal, rock and earth from three different angles had not reached the missing men up to an early hour this morning. W.W Inglis, President of the Glen Alden Company, is personally supervising the work of the rescuers, and it is hoped that the men will be found alive.

Michael Kelly of 2412 Winfield Avenue, a company hand, was killed. His body was found lying at a passing branch in the main gangway at 11:45 o’clock last night. A small scar on the head, probably received when he was thrown down by the force of the explosion, was the only mark on the dead miner’s body, according to reports from the rescuers.

With the exception of three entombed men, all other employees in the area affected by the cave had been accounted for, company officials said. The missing men are: Edgar Hughes, 1123 Ambers Street, Section foreman; Al Reese, 1014 Snyder Avenue, electrician and widely known sprinter and athlete; and John Barrett, 2106 Cedar Avenue, company hand.

Read more »
Posted by Mary Simonsen at 3:21 PM No comments:

This is My Town by Edward J. Gerrity
Scranton Times
September 1976

This is a story that can appropriately be title, “The Last of the Blues”—the famed Minooka Blues, a baseball team organized in the very early 1900s that won acclaim nationwide for its smart and brilliant playing on its home field in Minooka and on lots faraway from home, too. It was a selected group of youths that was taught the diamond sport from A to Z, and in their first three seasons, there was not a single defeat marked on their outstanding record.

On last September 5, James O’Neill of Mercersburg, a former Minooka resident who had played shortstop for the Blues and whose diamond performances attracted a scout for the Washington Senators and later was signed for the start of a major-league career, died in Mercersburg. So far as can be ascertained, he was the last survivor of the great Minooka Blues.*

Read more »
Posted by Mary Simonsen at 4:58 PM No comments:

Anthony “Tone” Walsh certainly hasn’t contemplated stealing any bases in a good many years. As a matter of fact, his quickest moves now come when he takes his leisurely walk to church every Saturday evening. 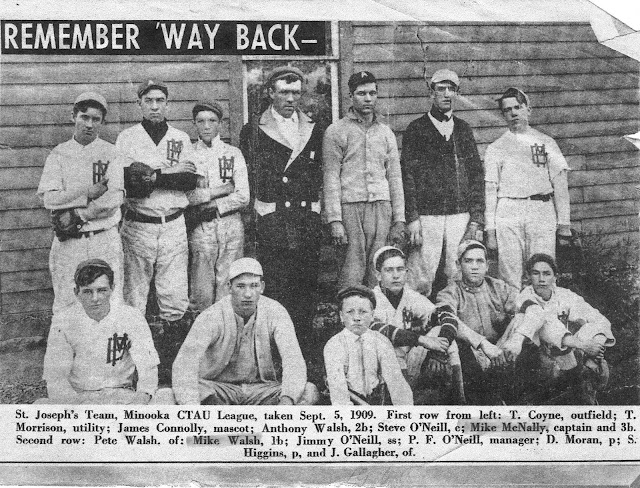 Walsh, an 86-year-old lifelong Minooka resident, is the last living member of the legendary Minooka Blues. The Blues played baseball some 70 years ago at old Burke’s Field in Minooka. They were a neighborhood group of 12-15 year-olds, who made a habit of beating the stuffings out of teams composed of players twice their age.

The team included four players who went on to play in the major leagues, including Steve O’Neill, who caught for and later managed the Cleveland Indians and Detroit Tigers; Mike McNally, who was an infielder with the Boston Red Sox and New York Yankees; Jimmy O’Neill, who was a shortstop for the Washington Senators; and Charles Shorten, who became an outfielder with the Boston Red Sox.

Walsh, who was joined on the team by his brothers Mike and Pete, was the Blues’ second baseman.
And while the aging process has dulled the speed of the legs, his mind quickly recalls those enjoyable years from 1906-09 when he was helping the Blues win game after game.

Labor’s Ex-leader the First Witness
Hon. T. V. Powderly Before the Mine Commission Today
(Terrence Powderly was the former head of the Knights of Laborer (pre United Mine Workers union).

“Mr. Powderly was of the opinion that one of the chief causes of the present condition of the mining population was the improved machinery for the mining of coal, increasing the output, and at the same time, reducing the amount of labor. Another reason, which is rarely taken into consideration, was the gas stove, which is used to a surprising great extent in New York City and all throughout the Eastern cities.” (He also mentioned increased use of bicycles in the cities.)

“Powderly started that there has been a great deal of suffering among the miners of Scranton during the past winter by reason of their inability to secure work.

“Patrick B. Calpin of Bellevue, a laborer in the Oxford mine of the DL&W stated he was an inside laborer and got $2.20 per day for ten hours. He averaged ten or twelve days a month this year. His average pay per month has been $17 or $18. He cannot support his family as he desires on the amount of his wages. He testified that there is destitution and want among the miners of the vicinity.

Read more »
Posted by Mary Simonsen at 1:58 PM No comments:

“The most backward place for building or improvements is that part of Minooka known as Carr’s Patch. The Carr’s Patch of twenty years ago is the Carr’s Patch of today with very few exceptions. All the wanderer would miss to make it what it was then is the buildings and shanties owned and occupied that time by Dan O’Brien, whose death not long ago took place at the Hillside farm. It was thought that the bringing of the silk mill, steel mill and button factory close to it would wake it up, but it seems doomed to its present condition. Davis’ Patch, though springing into existence at about the same time, has miles of buildings, with thousands of inhabitants. These two places constitute what is known as Minooka. It has within its limits ten schools, one church, a large hall owned by the Father Mathew society, and six grocery and provision stores.”

“The opening of night-schools in Lackawanna township is but another proof of the go-ahead spirit with which the School Board of the township is imbued. The sound of the large bell in Minooka every evening finds hundreds of boys whose good fortune it is to be in the district at their studies. Teachers should doubly exert themselves in behalf of those almost forgotten slate-pickers and drivers for no doubt on the teachers depend their future.”

Read more »
Posted by Mary Simonsen at 1:24 PM No comments: 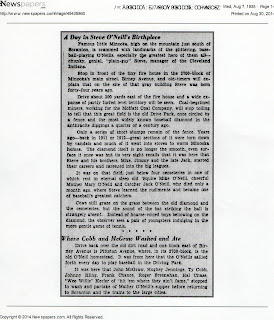 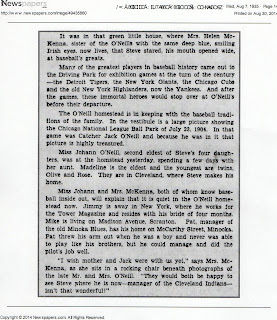 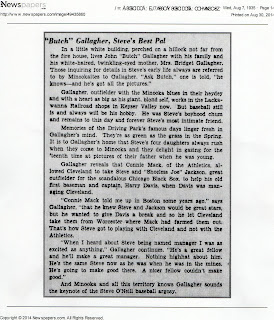 Posted by Mary Simonsen at 12:35 PM No comments: 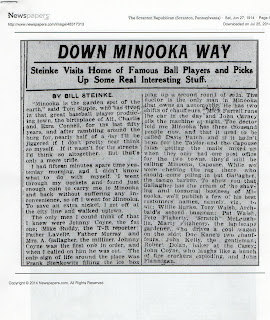 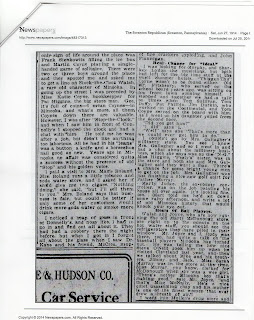 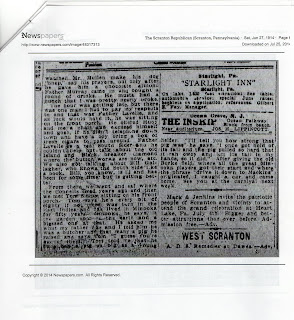 Posted by Mary Simonsen at 12:31 PM No comments: 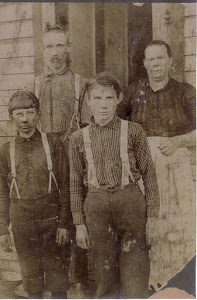 A site where memories and photos of Minooka and South Scranton can be shared.